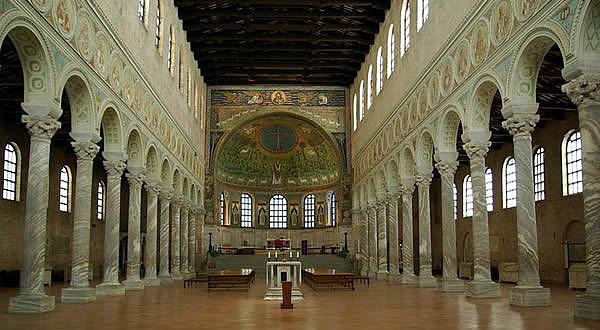 Basilica of Sant’Apollinare in Classe

Posted by: admin in Emilia-Romagna 793 Views

The Basilica of Sant’Apollinare in Classe is located about 5 km from the center of Ravenna. The basilica was built by Giuliano Argentario on the orders of Archbishop Ursicino during the first half of the sixth century A.D. The consecration of the Basilica took place on May 9th of the eighth year after the council of Basel, that is in 549 A.D.

Sant’Apollinare in Classe has been described as “the most impressive example of early Christian basilica”. The church is one of the most beautiful basilicas of Ravenna. In addition to its architectural structure, what made it famous are its mosaics and the marble tombs of the old archbishops. On the left of the basilica is a tall cylindrical bell tower dating back to after the ninth century A.D.

The basilica, which is 55 meters long and 30 meters wide is majestic and impressive. On the central body of the façade, framed by two lesenes, it is incorporated the narthex, which ended on the left by a rectangular room with its own upper floor (a turret), which had its counterpart on the other side, even if it has been lost for a long time: traces of it, however, have come to light. Even the right turret, likewise, has been lost.

The basilica would have had, originally, an even more grandiose aspect than it is today. In fact, apart from the loss of the right tower, missing the quadriportico which was located in front of the narthex and that, according to recent research, it was wider than the actual basilica, extending beyond the rooms to the north and south (an expanded quadriportico). 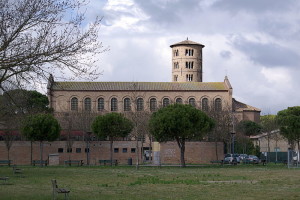 The basilica – which was built externally of brick (each about 4 x 48 cm, divided by a layer of mortar of equal thickness) –  was built on an ancient cemetery, in use from the late second century and up to the time of the erection of the basilica (mid-sixth century). In it, the first bishop Apollinaris was buried in a sarcophagus located midway along the south side of the basilica, at that point, there is an inscription, which is considered from the sixth century, which states that the urn of Apollinaris was transferred to the interior of the church, during the reign of Maximian (in hoc loco stetit arca apolenaris sacerdotis et confessoris …).

Inside, the basilica is characterized by a spaciousness that gives the sensation of entering into a dimension that is both abstract and transcendent, impressive in its grandeur and majesty. The basilica is divided into three naves by two rows of twelve columns – all of the same greek veined marble originating from the Sea of Marmara – resting on nuts decorated with a diamond pattern, something very common in Constantinople and in the Eastern world in general.

The interior is well proportioned: the size of the central nave is twice of that of the aisles. In addition to the columns, are worthy of attention the beautiful capitals for their motif called “acanthus leaves moved by the wind,” which give the impression that the carved leaves are inflated by a breath of wind. Between the arches and the side walls of the nave are to be seen portraits of the eighteenth century cameo representing the bishops and archbishops of Ravenna. 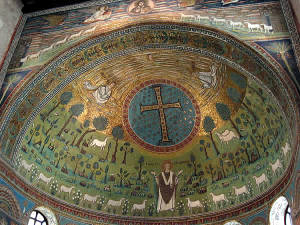 The original floor was a mosaic of geometric motifs: fragments of it were discovered at the end of the left aisle, in the middle of the nave (now located on the right wall of the church) and at the beginning of the right aisle: in the latter, the inscription commemorates ‘Gaudentia’ and ‘Felix’, the names of two of the church benefactors who have contributed with their own money to the laying the floor.

The opulence of the interior must have been amplified by the precious marble that covered the side walls until it was not removed from Sigismondo Pandolfo Malatesta at the beginning of the fifteenth century to adorn the temple he was having built in Rimini. Originally, on the side walls, there were three doors. The basilica ends in a semicircular apse, which has a polygonal exterior shape, flanked by two square rooms, each with its own small polygonal apse, an oriental use, which has become part of the Ravenna tradition.

The Basilica of Sant’Apollinare in Classe is a UNESCO World Heritage Site. 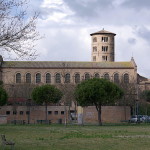 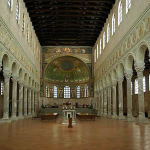 2016-03-16
admin
Previous: Ravenna: the city of mosaics
Next: Friuli-Venezia Giulia what to see: the tourist attractions

Ravenna: the city of mosaics