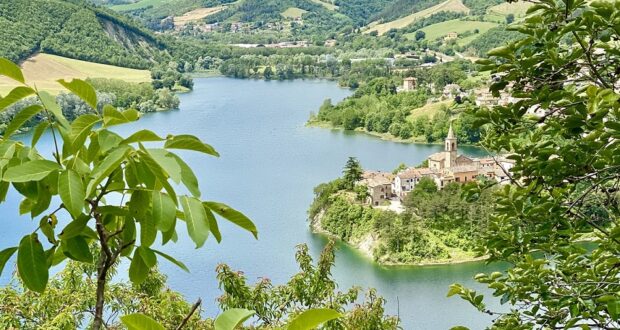 Marche what to see: the tourist attractions

Posted by: Laura in Marche 595 Views

The Marches is a region in north-central Italy which it lies along the Adriatic Sea between Emilia Romagna, Tuscany, Umbria, Lazio and Abruzzo. The coast stretches for over 170 km and is mostly flat and smooth, with the exception of the coast north of Pesaro and the Conero promontory, south of Ancona.

The interior of the region is hilly and mountainous, the hills in fact cover almost 70% of the Marche region, the remaining 30% consists of mountains. The Umbrian-Marchean Apennines chain marks the border with Umbria. In the southern part of the region are the Sibillini Mountains, where is the highest mountain in the Marches: the Monte Vettore (2,478 meters).

Between the Apennines and the sea is a vast hilly area, often interrupted by short streams that flow perpendicular to the coast, the most important of which is the Metauro, these rivers to reach the sea have often had to dig in the rocks spectacular gorges such as the Furlo Gorge (Gola del Furlo), the Gorge of Arquata (Gola di Arquata) and the Gorge della Rossa (Gola della Rossa).

The Marches was the land where were born important people of the past, among them we can mention some of the great artists of the Renaissance such as Raphael (Raffaello Sanzio da Urbino) and Bramante (Donato “Donnino” di Angelo di Pascuccio da Fermignano), or famous musicians like Gioacchino Rossini, poets such as Giacomo Leopardi, and coming down over the time Marches have also given birth to an emperor, the famous Frederick II, Emperor of the Holy Roman Empire who was born in Jesi in 1194.

Marche what to see: the tourist attractions

Marche is a region with great potential both from the point of view of cultural and artistic tourism and also from the beach and entertainment tourism.

The sea is the main tourist attraction of the region, there are over 170 km of coastline with beautiful sandy beaches, coastal areas of great natural beauty such as the Conero promontory, and seaside resorts like Gabicce Mare, San Benedetto del Tronto, Senigallia, Porto Recanati, Cupramarittima, Civitanova Marche, Grottammare, Portonovo, Sirolo and Numana.

The art cities are another fascinating attraction for tourists who visit the Marche, Urbino is the most popular and well known. But are worth a detailed visit also the cities of Ascoli Piceno, Macerata, Ancona, Pesaro, Fabriano, Fermo, Jesi, Urbania, Loreto. Small towns like Camerino, Recanati, Tolentino, Corinaldo, Ripatransone, Offida, Pioraco, Arcevia, Matelica, Gradara, Caldarola, Montefortino and San Severino Marche. The medieval abbey of Chiaravalle di Fiastra, the ancient Roman city of Urbs Salvia (Urbisaglia), the Roman remains of Fano and Ancona, the ancient Roman city of Suasa close to Corinaldo. The castles like that of Lanciano, near Castelraimondo. The Castello della Rancia, near Tolentino. The Castello Pallotta in Calderola. Thermal spa are located in Acquasanta Terme, Aspio Terme, Saranano, Carignano Terme, and, near Tolentino, the Terme di Santa Lucia.

The landscape and nature in the Marche region play an important role, how not to mention the famous Frasassi Caves (Grotte di Frasassi), the Furlo Gorge (Gola del Furlo), the Gola della Rossa or the stunning views of the hills that can be admired from Cingoli, the balcony of the Marches. In the region there are two national parks (Monti Sibillini National Park and the Gran Sasso and Monti della Laga National Park) and four regional parks (Conero Regional Park, Monte San Bartolo Regional Natural Park, Sasso Simone and Simoncello Regional Natural Park, Gola della Rossa and Frasassi Regional Natural Park), as well as numerous nature reserves. In the Sibillini Mountains, in winter you can enjoy skiing in the centers of Sarnano, Bolognola e Castelsantangelo sul Nera.

Like any other Italian region, including the Marches have an interesting variety of food and wine, to name a few: olive ascolane, vincisgrassi, brodetto all’Anconitana, rostide di pesce, porchetta (roast pork), cheeses (pecorino, ricotta and caciotte), the typical salami from the Marche (sopressata, prosciutto, salame di pancetta) and wines (Verdicchio, Vernaccia).

Booking.com
2016-03-16
Laura
Previous: Molise climate: when to go to Molise
Next: Tuscany what to see: the tourist attractions