Posted by: Laura in Liguria 346 Views

Portofino is a small coastal town on the eastern Liguria, which has become a famous place to be frequented by the elite tourism. The village retains its medieval appearance arranged along the harbor, which was once the center of the maritime activities of the borough, and is now the center console of this charming popular tourist center. The fishing village is nestled in a beautiful cove at the south-east of the Portofino promontory.

Ancient fishing village located on the Ligurian east coast, less than 40 km from Genoa, Portofino overlooking the Gulf of Tigullio at the foot of the homonymous cape, much of which is protected as a regional park. Portofino is of Roman origin, Pliny writes of a “Portus Delphini” because of the large number of dolphins who were stationed in the gulf. The importance of Portofino grew in the Middle Ages, thanks to its natural harbor, it was a safe harbor for ships. In the early twentieth century, the first to discover the beauty of this place were the English.

Popular resort of international tourism, the charming fishing village is dominated by the Castle of St. George (Castello di San Giorgio), also known by the name of Brown Castle, built by the Genoese in the sixteenth century. Very nice is the short walk in the pine forest that leads first to the church of St. George (San Giorgio), which houses relics of the saint, and then comes to the tip of the Cape, passing by the castle of San Giorgio. For those who enjoy walking, another very nice excursion is the one that leads to Portofino Vetta (416 meters high), the walk is along a very scenic path surrounded by olive trees and pines, and to fulfill it two and half hours are needed.

Nearby do not miss the excursion to the abbey of San Fruttuoso, situated isolated in the middle of the cape, and accessible by 20-minute boat or by footpath from Portofino, the abbey is a monumental medieval Benedictine complex, which houses the burial of the Doria. 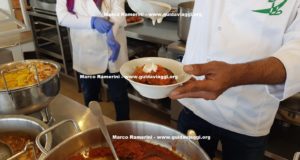