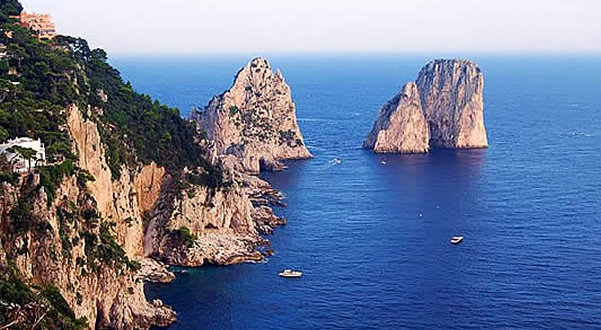 Capri: the jewel island of the Gulf of Naples

Posted by: admin in Campania 252 Views

The island of Capri is located in Campania, and is one of the many islands of the Bay of Naples. Capri is located about 30 km from Naples and covers an area of about 10.4 square kilometers. The island is divided into two municipalities: Capri and Anacapri, which have a total resident population of over 12,000 inhabitants.

The island territory is very complex from a geographical point of view, full of bumps and virtually without a flat area, the island has peaks of medium height (Monte Solaro (589 metres) and Monte Tiberio (334 metres)) and some interior highlands. The coastline is very irregular, often with large rocky cliffs directly overlooking the sea, along the rocky walls there are numerous caves and small bays that alternate with steep cliffs. One of the most photographed places on the island is the bay where lies the Faraglioni, high rocky cliffs that are situated a short distance from the shore.

The island’s coastline is dotted with caves and cliffs that form suggestive and fantastic rock formations. The island has been inhabited since the Paleolithic, it was later colonized by the Greeks and then the Romans. After a visit to Capri made in 29 B.C., the Emperor Augustus was so in love that bought the island from the city of Naples offering in exchange the island of Ischia. 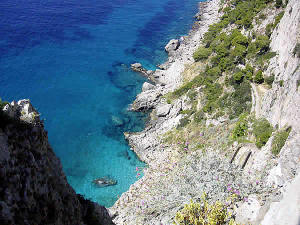 From the fall of the Roman Empire (476 A.D.) until the end of the early Middle Ages (1000), Capri was under the control of the Duchy of Naples. In the sixth and seventh centuries, the island was sacked by Saracens and was dominated in the years that followed by the Lombards, Normans, Angevins, Aragonese and by the Spaniards. The island’s cultural revival began around 1800, when attracted by a wonderful climate and the beauty of the place, the island was subject to the peaceful invasion of the British, Americans and Germans.

The island became famous in 1826, after the tourist discovery of the Blue Grotto (Grotta Azzurra). Capri is an island of myth, since the time of the Roman Empire, when the Roman emperor Tiberius, self exiled to Capri, built for himself on the summit of Mount Tiberius, in the eastern part of the island, a huge villa (Villa Jovis) whose remains are still visible. Capri continues to be, still, a favorite destination for travelers, intellectuals and the jet setters.

What to see: the sights.

Climate: when to go.

Getting there: ferries, hydrofoils, car ferries.

Getting around: bus, cable car, chairlift. 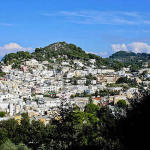 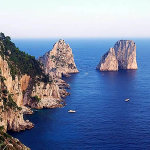 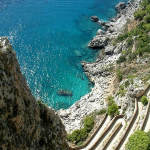 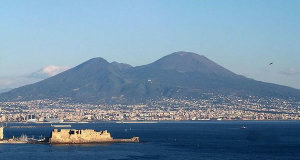