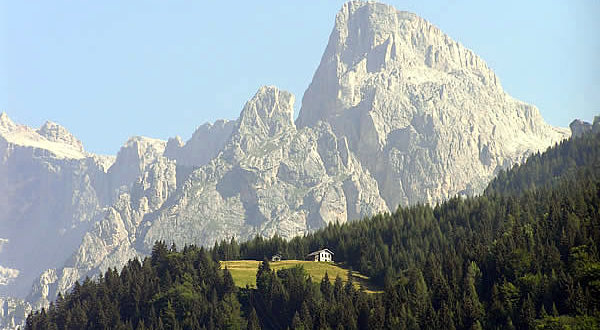 The Dolomites are located in the northeastern part of Italy and its territory is divided almost equally between Trentino, Veneto and Alto Adige. The Dolomites are famous for skiing in winter and mountaineering, trekking, cycling, and other activities in the open in summer, spring and autumn. The climate of the Dolomites is the classic alpine climate but due to the conformation of the mountains is very complex and can vary considerably as well as in function of altitude also as in function of exposure to flows coming from the north and from the Mediterranean.

In the bottom of the valleys usually the weather is not too cold in winter. The exposure of much of chain to the south favors the mild climate and protects most of the territory from cold winds from northern Europe. Temperatures decrease with increasing altitude, but there are also rather obvious differences also depending on the geographical location, for example in the Pusteria Valley winter temperatures are much colder than other areas, and the average minimum temperatures of January in Dobbiaco, located about 1,200 meters high, are lower than those recorded in the same month in Passo Rolle, located over 2,000 meters high. The summer months, those ranging from mid-June to mid-September, have warm temperatures and plenty of sunshine, perfect weather for hiking and climbing. During the summer the average maximum temperatures can reach 20 ° C at altitudes above 1,500 meters, while in the valley floor you can get to 25 ° C.

In winter, the snow usually begins to accumulate in November, and snow constantly maintain the snowpack until March, and sometimes until April. The snow falls throughout the winter, but the winter being the driest season of the year the snow is never very abundant. Despite this in the valley areas in the mountains generally fall around the meter and a half – two meters of snow per year. At higher altitudes above 1,500 meters snow falls throughout the year.

WHEN TO GO TO THE DOLOMITES

The Dolomites have one of the best climates in the Alps, perfect for outdoor activities all year round. In summer the Dolomites provide a refreshing climate as opposed to the oppressive heat of the nearby Po Valley. Summer, however, is also the wettest time of year, the rains usually resulting into strong intensity afternoon thunderstorms that lasts less than one hour. In autumn, the temperature drops, but the weather conditions remain stable and pleasant even if the rains persist. In winter the snow is always present and this is the paradise for lovers of skiing, at this time the temperatures are usually below freezing, but the sun is shining 15 days out of 30 in the Dolomites more than anything else in the Alps. In spring the climate becomes warmer and the days are gradually getting long the rains begin to make their appearance, however, this has the positive aspect of a deep green color of the Dolomite valleys and purify the air making visible spectacular views.

TABLES OF CLIMATE OF THE DOLOMITES